You always get to that point, when teaching something easy, that you start to cross over into the realm of the slightly more complicated. That was what happened when I started showing how to use a transistor to buffer an Arduino output to switch a 12V load. So we started going into current amplifiers, Vbe and Vce, Saturation and configurations.


The next day, on my way to a meeting I was struck with the idea that an Arduino could make it really easy to show how a transistor works – and it would be more understandable because the students would build it themselves.


A transistor is a current controlled device. It will control the current through the collector to be a multiple of the base current as long as that current is available.The last part is important. If you have a supply that can only provide 10 mA, there is no way that the transistor can manufacture more. It can only allow the current available to pass or restrict it. Ic = max (β x Ib ,,available)
where Ic is the collector current, β is the gain and Ib is the current into the base.

In common emitter mode, the load and the supply voltage determine the maximum available current. So, for example, a 100 ohm load to a 5V supply cannot possibly supply more than 10 mA to ground by virtue of ohms law.


The idea was to start off with something incredibly simple that the students could understand – so I settled on manual control of the input voltage using a potentiometer.
The transistor and the two resistors form part of the test circuit. 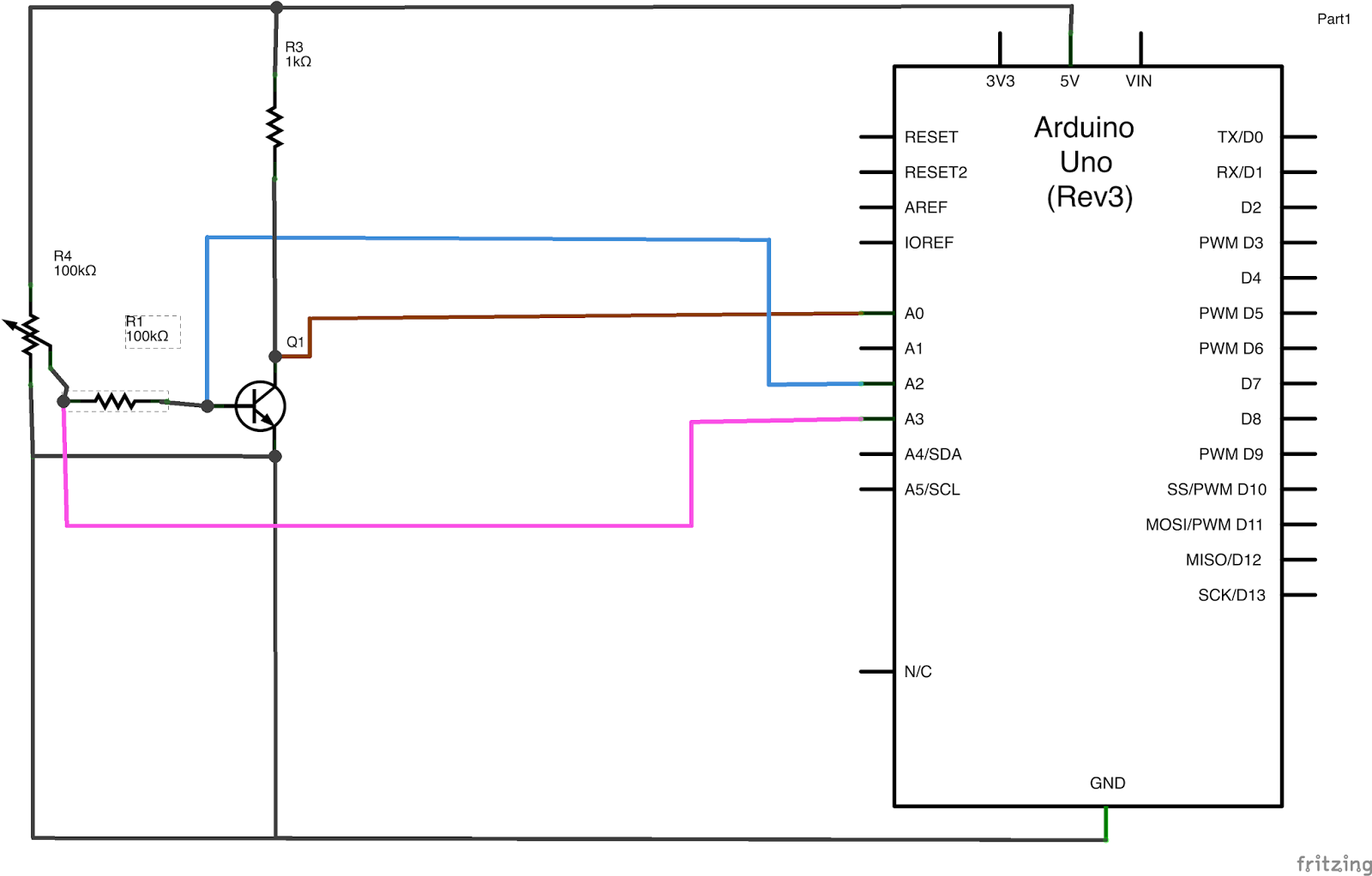 Thus the Arduino is able to measure the source voltage, the base voltage and the collector voltage as you change the potentiometer position.

This was easily wired up on a breadboard as follows 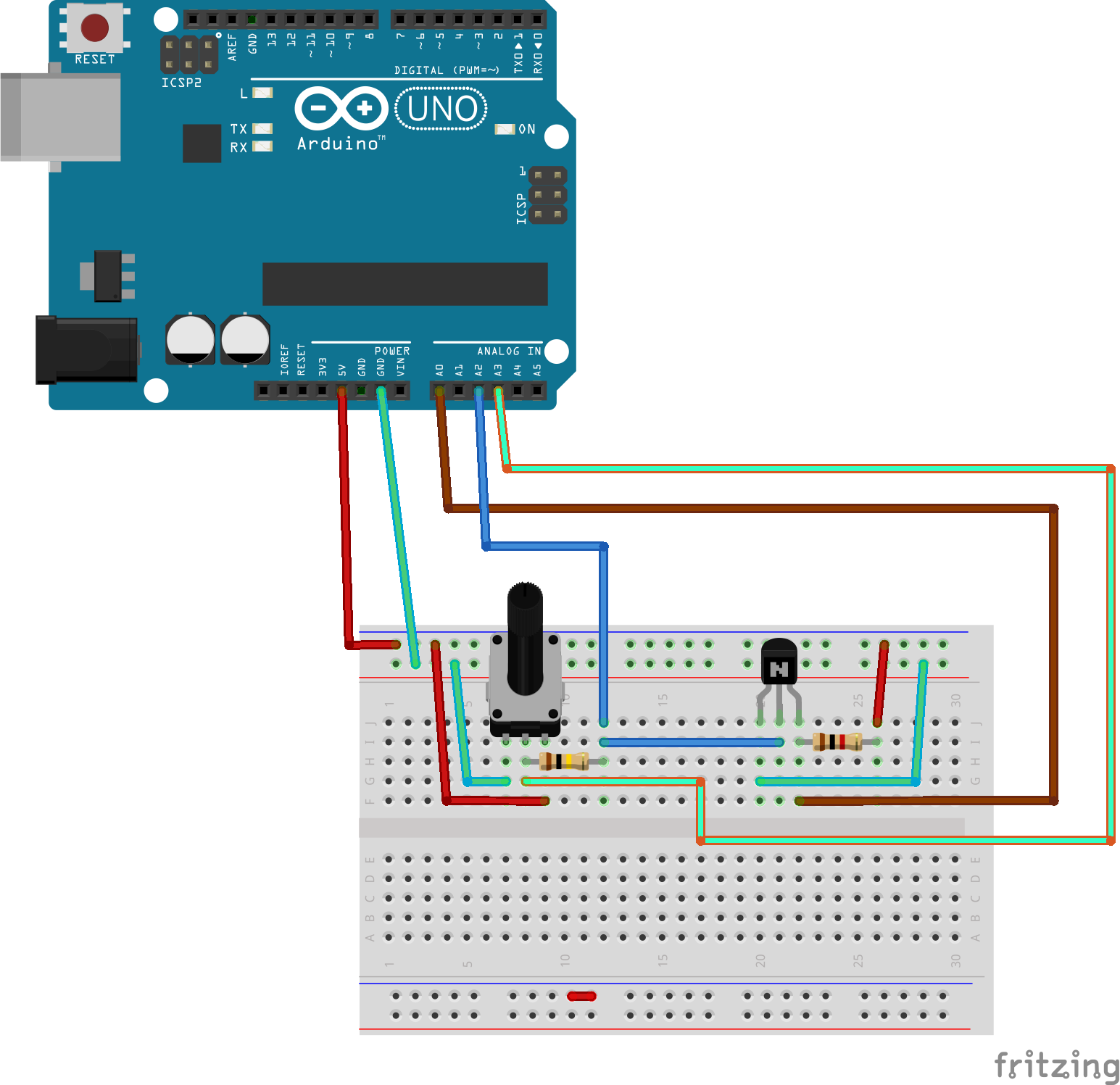 
Since we want to graph the output, we will send it to a host computer via the USB Serial link. This reduces the requirements of the Arduino code to reading the analog inputs, converting them to voltages and transmitting them.

We then combine the three readings into a single text line and transmit them in text mode to the computer. Using plain text makes it far easier to debug the program on both sides. As a result, the Arduino code is really simple.

And that's it! The program simply reads the voltages and sends them to your computer which has the job of interpreting and displaying the data!

We use the computer to receive and display the data so we write a small program in processing that will read the data from the serial port and store it into a list structure. A serial event is generated every time a new line of text arrives. The data is extracted and put into an object which is stored in an ArrayList. The ArrayList is sorted based on Ib as each item is added because data can come in out of order as you twiddle the potentiometer knob. If you turn too fast you will start with a very rough graph. You can refine it by turning it backwards and forwards – or turning it slowly.

The program then draws a graph background and plots the required graph as selected by the user.

The program then draws a graph background and plots the required graph as selected by the user.

Since the Processing code is somewhat more involved, you can download it from GitHub from the link at the end of this article. The raw data gives us the following curve: 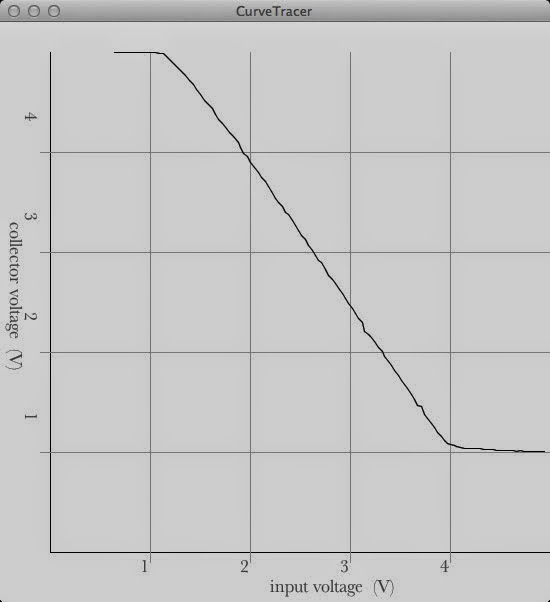 This is a plot of the raw data from the Arduino - but is really only useful for understanding exactly this configuration (with these exact resistors). However it does show you that you have an inverting amplifier. 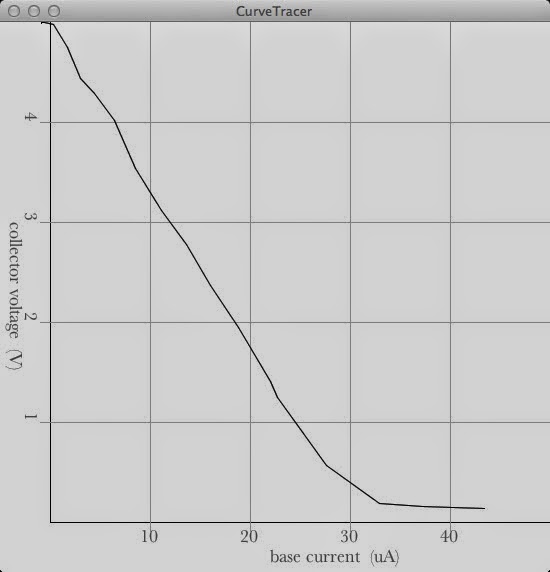 Variation of Vc with Ib 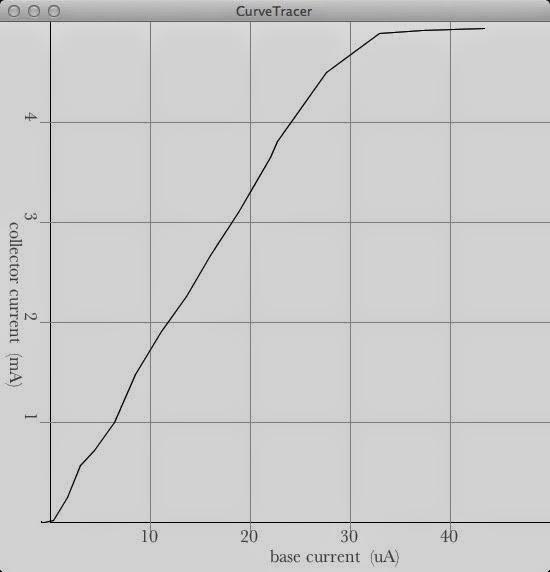 Variation of Ic with Ib


The Ib/Ic curve shows the tail off of the gain when the transistor reaches saturation. The saturation occurs not because of the transistor but because the resistor cannot allow a current of more 5v/Rc to pass given the 5V supply.

As you play with the potentiometer, you will notice that more points make the curve smoother. Depending on the consistency of your connections you may experience a few glitches but you get enough data to see the pattern.

The circuit seems to work pretty well – and the curves are OK except that they are a bit jagged.
On refelection, we are assuming that all three readings are under simultaneous conditions when in fact, moving the potentiometer means that the readings are not at the same point. Just as important, we cannot cover a smooth range of input voltages (Vs) because we are manually turning a knob on the potentiometer.

The MCP4131 is an SPI device with a small difference. I will be covering the nuts and bolts of SPI in another post. This device shares SDI and SDO so you need to add a small change from the usual circuit - which is a single resistor as shown by this note in the data sheet.

This is really simple to implement as shown below. 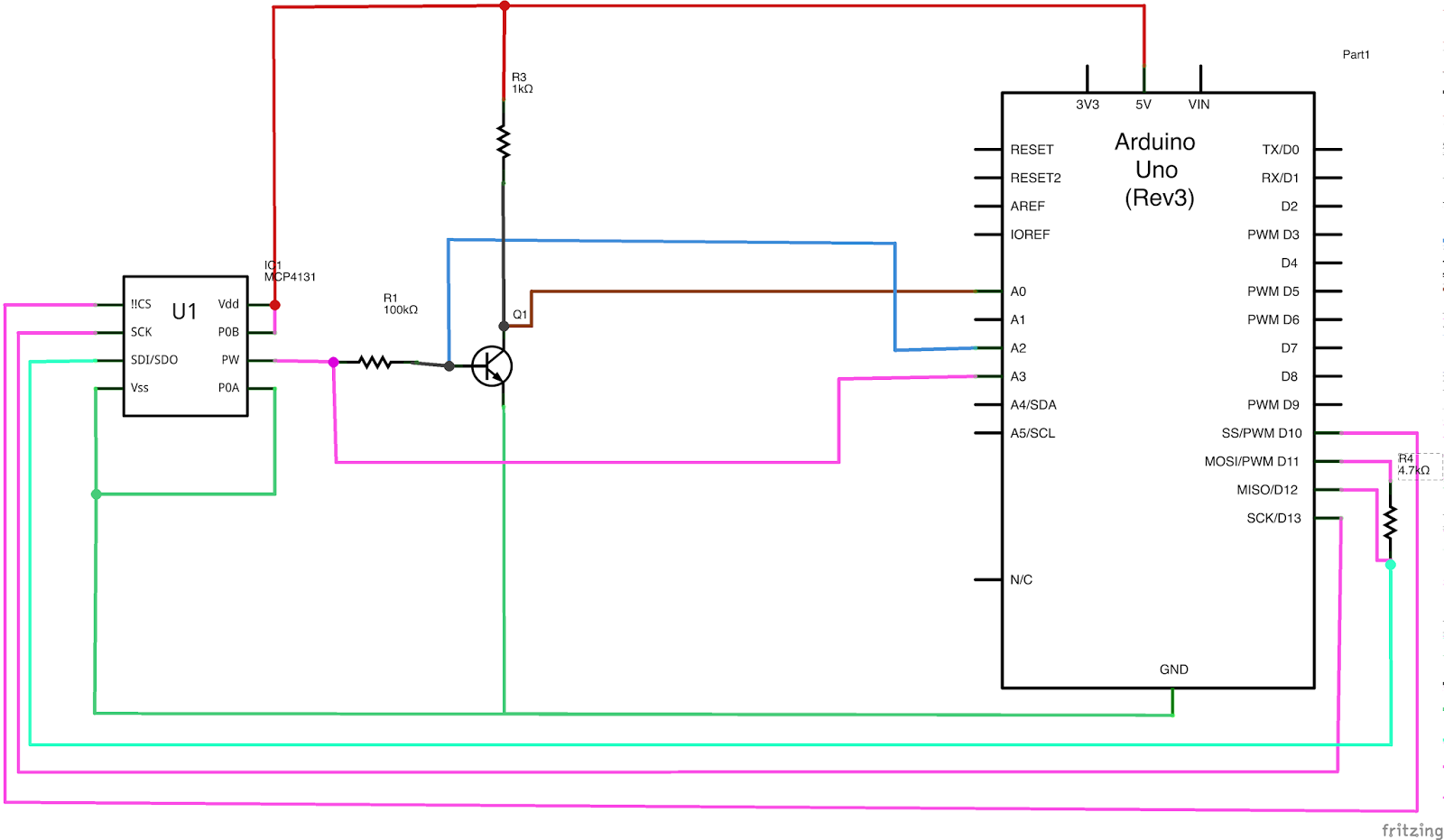 And the wiring is just as easy 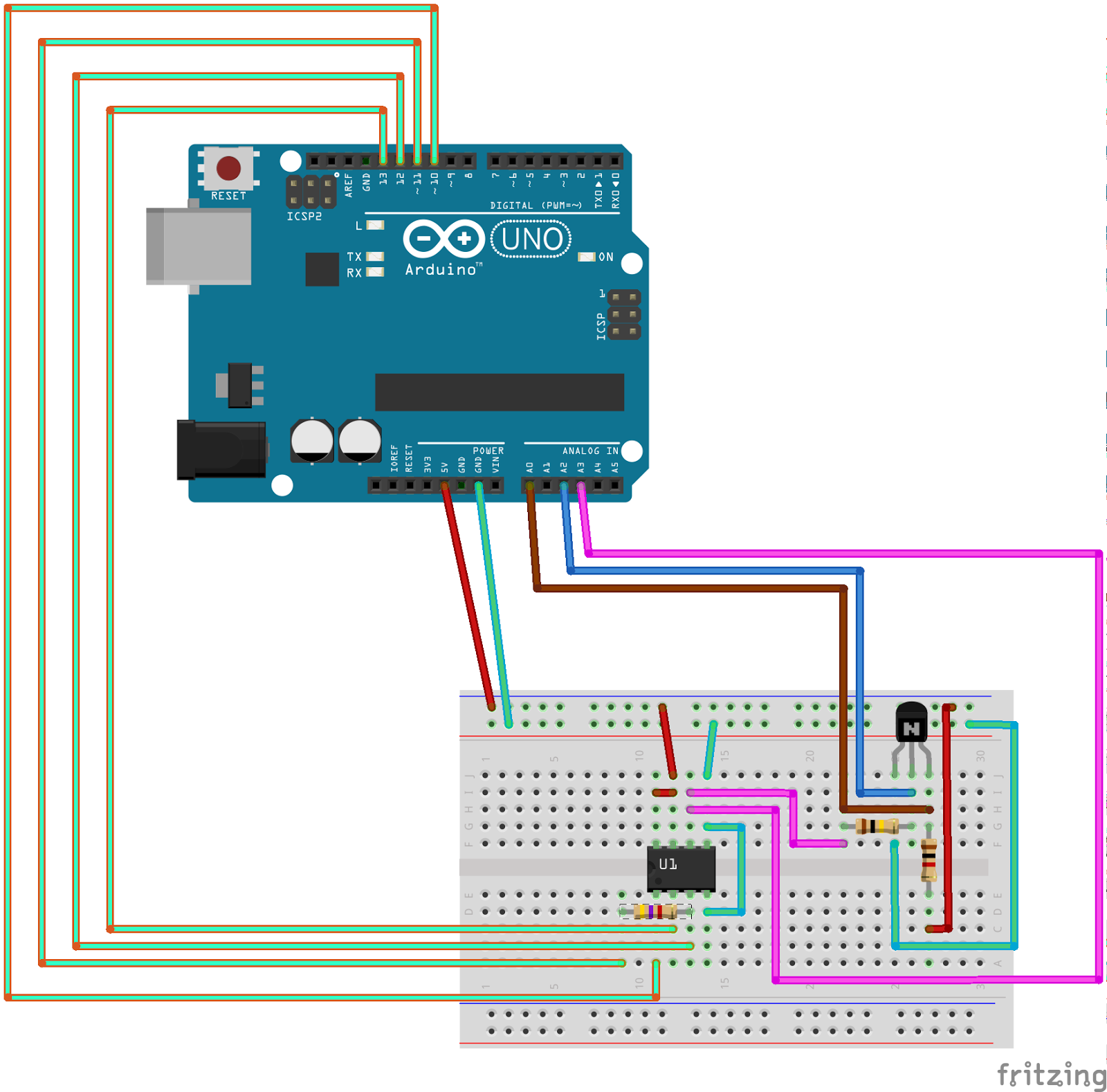 To use the MCP4131 you can download and install the MCP4131 library. I thought I was going to have to write it - but it is quite a simple library.

One important thing to note is that although it is a seven bit device, the vales range from 0 to 128, not 127 as you would normally imagine.

In the setup code

Since I had to write changes to the Arduino code to use the MCP4131, I also modified it to do a single sweep of the Potentiometer (with tapValue from 0 to 128) and then stop until it received a “G” on the serial port.

Then I modified the Processing code to send the G when the user requested for a new graph to be drawn.

The result was far smoother graphs. 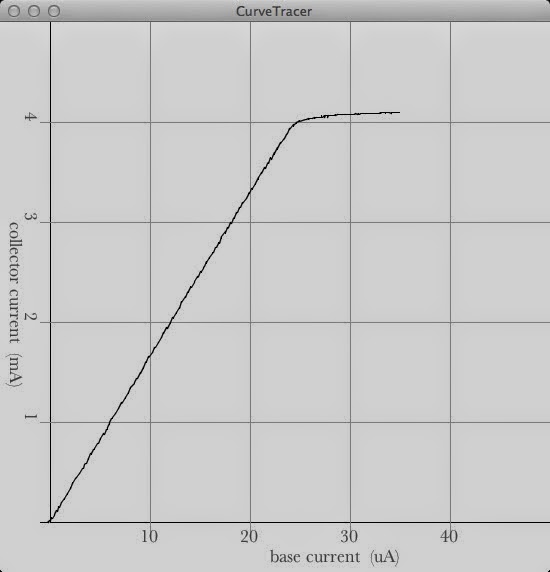 That's is about it. There is a ton of future work to be done - starting with different transistor configurations.

See the GitHub repositories below for code:

Dave Appleton
I wrote my first computer program a couple of years after England won the World Cup. Wasn't really interested in the football but programming changed my life.....